I have to confess that keeping up with the trials has been, well, a trial. All the other propagation activity, planting out, greenhouse hokey kokey etc etc has got in the way, it’s all a bit frantic.

This trial is investigating whether there is much benefit in early sowings of annual seeds. In my previous update on this trial, I declared the later sowings a winner, at least for the Cosmos.

Today I rather belatedly got around to inspecting the antirhinum in the late pot. They were in serious need of pricking out. There were just 13 seedlings, I’ve no idea what rate of germination that translates to, but it’s a similar quantity to the early sowing which were potted on some weeks ago.

Here are the late seedlings, sown in early April.  They are just babies still.

And here are the early group, which were sown at the beginning of February. 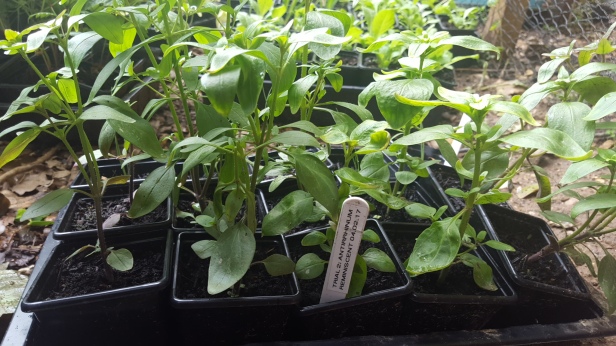 They are looking like good little plants, and are now more or less hardened off.  I’ll be looking for a suitable spot to squeeze them into.  Maybe the border I just finished planting out…

This trial is a race to first flower, so it’s not over yet.

I’ll be back in a few weeks, with an update on Trial 02, hopefully with flowery news.