Having completed Border 1 a few wèeks ago, it is time to get on with the long border, border 2.  The border is 8m long by about 1.2m wide.  It is southish facing so gets the sun for most of the day, although it is increasingly shaded by the house from late afternoon. The soil is naturally a little sandy, but I’ve mulched it twice in the last 6 months. First time was with compost from the heap before Christmas, second was with a thick mulch of spent mushroom compost earlier in the spring.  As a result the soil structure is becoming quite good, or at least seems it to my uneducated eye.  For plants in a pot 1 litre or larger I have developed a liking for my post-hole digger as a tool for planting out.  It makes short work of a good wide, deep planting hole.

Here is the plan for Border 2, split into two so it will fit on the page.

‘The three shrubs marked “tbc” remain so.  I’m waiting till some cuttings have grown on large enough to plant out.  In the meantime I’ve stolen that space for perennials.  Looking again at the plan, what I actually planted bears little resemblance to what I’d planned. Most of the plants are the same, but the locations are quite different.  I think an illustrious general once said that there’s only one thing more useless than a battle plan, and that’s not having one at all.  The plan provided a useful framework for the planting but I was not able or indeed inclined to stick rigidly to it.

That’s all the space from the hamemilis molis to the end of the border.   Here it is all planted out. 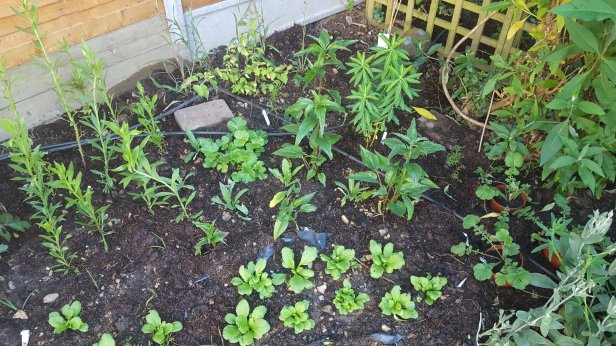 In the central foreground are a group of primula japonica ‘millers crimson’.  I grew 60 of these from seed, which was way too many in the first place, but I also now find that they like boggy ground, ideally pond-side.  I’ve created a facsimile of this by digging up a few square feet of ground and lining it with a double layer of compost bag and refilling it.  I have not added any drainage, so it should get properly boggy.  By way of experiment, I also planted a few plants in the normal soil, I shall compare and contrast.   Behind those are a group of 5 mystery plants.  I cannot for the life of me recall what they are, I got them as teeny plug plants in a winter perennial offer a year or two ago.  They have been parked in a nursery bed since then.  They’ll be easier to identify once they have flowered, I hope.  Behind those is a euphorbia conigera that I bought at a plant fair, and to the left of that is a cornus midwinterfire that I should have planted at the far end of Border 1 but whose spot was usurped by foxgloves. This came from a rooted sucker that I was given by a neighbour.  To the left of the mystery plants is a geum, a recent plant fair purchase, an orange variety, allegedly ‘Hannah’ and also a smattering of oriental poppies.  At the rear left of the picture are a larget group of helenium autumnale, and in front of those some crocosmia lucifer.  I also dotted around a few surviving cosmos ‘rubenza’ and also some more evening primrose.  There are possibly too many plants in this area, but I prefer to err on the side of too many, a well-stuffed border being preferable to me than a spottily planted one.  I can always remove plants if it gets too crowded.   Unless otherwise stated these have all been grown from seed this year. 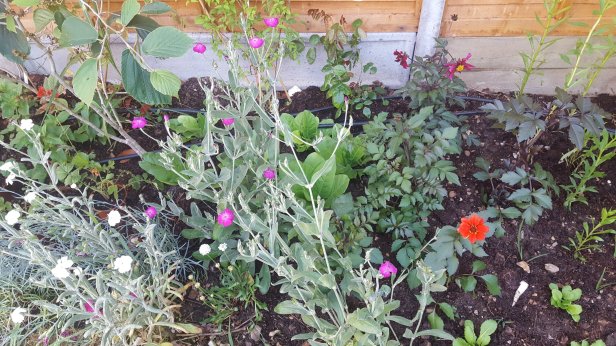 Moving further to the left, up as far as the hamamelis mollis, I have at least paid some lip service to the plan.  A bunch of dahlia ‘bishops children’ have been planted here.  The [R] in the plan was intended to be a rose, danse de feu, which I was crossing my fingers would survive as a cutting.  It has indeed survived. I’ve decided to leave it in its pot for now, although as you can see in the photo I have placed it in its eventual planting hole. I want to let the roots develop for a while before planting it out properly. It should clamber up the fence and work well with the neighbouring clematis.  Between the dahlias and the hamamelis are some nicotania sylvestris. The white lychnis coronaria and the pinks next to them are existing plants that I’ve left be.

I found I had a lot of reasonably light and airy planting space under the canopy of the witch-hazel (hamamelis mollis) that I didn’t account for in the plan.  Under here I have planted some monarda and some geum ‘mrs j bradshaw’. In fact I haven’t planted the geum, merely placed them where I want them. I only recently potted on these divisions and I want to give the roots a chance to occupy more fully the space they have in the pot.

I’m not 100% convinced I like the witch-hazel, it doesn’t do much for me interest-wise, although I’ve had it for years.  The flowers are a rather boring shade of yellow.  I might grub it up next year, we’ll see.

Moving swiftly along, further up the border, a shot from above makes it easier to show the planting. From right to left, some more geum, some more monarda, then behind the lily are some crocosmia lucifer. To the right of the lily are some verbena bonariensis which I hope will add some height to the front half of the border.  At the back is another rose ‘danse de feu’, a rooted cutting like the other one.  The cordyline is an existing slightly scrappy plant I am tolerating for reasons that escape me.  In front of that I’ve planted some antirhinum and potentilla ‘monarchs velvet’. 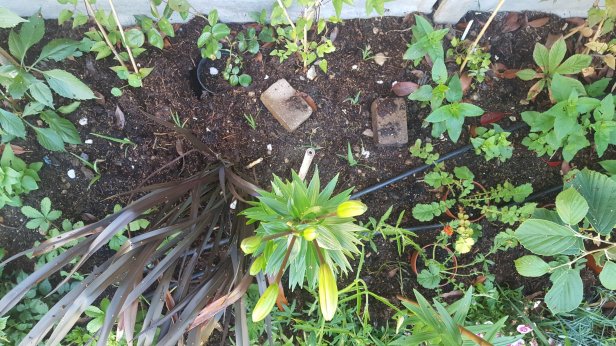 At the top left is a dahlia, ‘rebeccas world’, I think. Moving on up to the escalonia, the clump of astilbe at the front is an existing plant, and to the left and behind that are more dahlias. The three at the back are new tubers that I’ve grown on this year, ‘Rebecca’s world’, ‘Caribbean fantasy’ and ‘Manhattan Island’, the rest are ‘Bishop’s Children’ all of which I grew from seed last year and overwintered. There are also some evening primrose towards the front, and more monarda behind the dahlias on the left.

There is still some space at the very front, I have some dianthus earmarked for that.

Moving along further we’re into mainly existing plants rather than newly planted.  The escalonia was for the high-jump but inconveniently it has finally flowered, at least on half the shrub, so I’ve left it in for now.  I did plant the lobelia tupa in the correct place, but less than I’d planned due to the escalonia. They are a little lost behind the escalonia but should grow up to be taller so that the flowers show.  Hope they are getting enough light down there.

Finally, the far left of the border. The loosestrife, anemone, alchemilla mollis, physocarpia were existing plants so they are as per the design.  I put in some more astilbe divisions at the front.

The various clematis growing along the fence are beginning to flower, I’m expecting better things from them next year once they’re more established.

So that’s it, the full length of the border. The areas that are mainly new plants look a little sparse at the moment but they’ll soon bush out and grow up, particularly with all the rain we’re having at the moment.

I’ll be back soon with news of Border 3.