It’s a mixed bag. Something is still killing off my rooted cuttings, very few are left and many of them look a little the worse for wear. I have lamented at length on this previously, so shan’t repeat myself. It’s either potting up too soon, or too deep, or the compost, or the propagating goblins.  Who knows.

Here’s what’s left in the land of the living from that batch of over 30 rooted cuttings:

1) penstemon – just one, although it is looking pretty perky. 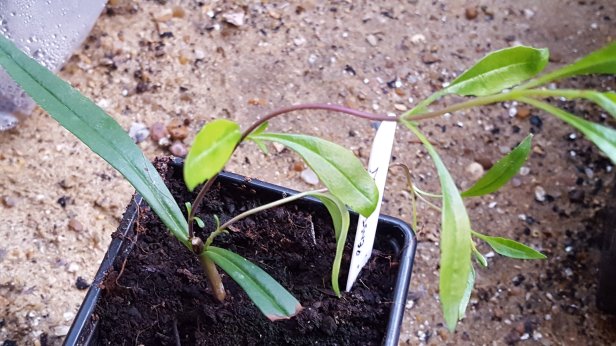 2) gaura – one that isn’t yet dead, but I think it’s heading that way
3) carnations – two, I think.  I don’t even like carnations!
4) peony – a cutting I swiped from Greenwich Park back in May. It isn’t doing much, but it is still with us.
5) weigela – a few of these have rotted off but there’s still four or five left.These don’t look substantially different to when I took the cuttings way back, I’m not convinced they will amount to anything, we shall see. 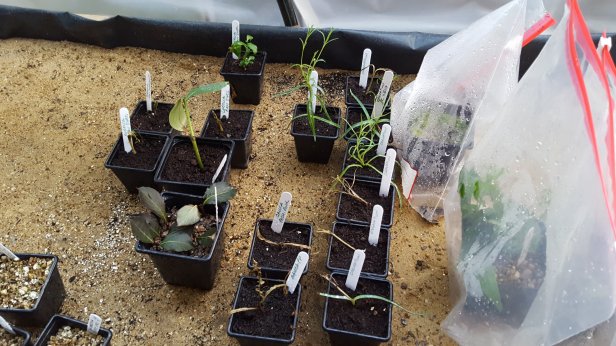 Not a lot to celebrate so far, but on a more positive note, I have a few others brewing away.

Eryngium root cuttings.  These were taken about 1 month ago, a little early in the year. They started to show signs of new top growth a week or two ago, and now have very visible little flushes of green at the top of most of the roots. I think this is just using the reserves in the root rather than evidence of new roots. Previous root cuttings of japanese anemone behaved like this but did not produce new roots for some months. I shall leave them to it, they are just on unheated staging in the greenhouse. 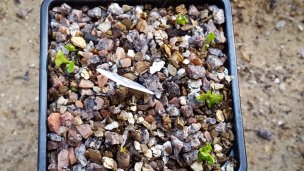 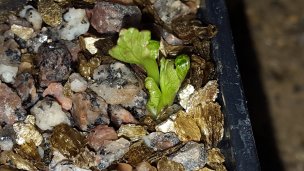 The next group of cuttings have all been sitting in their own enclosed environments, usually one pot per closed ziploc bag, sometimes two. The bags have been kept in the heated bench. In the main, the cuttings seem to be enjoying this.  While a few have rotted off, the majority are looking good with lots of new top growth, and some early signs of roots emerging from the bottom of the pot. I am resisting the temptation to pot these on. I have opened up the bags as the first stage of getting them used to a less pampered environment, and I will give them all a little feed up with liquid tomato feed before I head off on hols this weekend.

They are as follows: 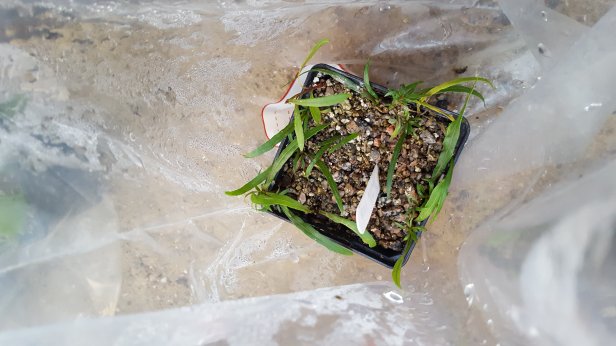 2) Geum, a little bit moth-eaten actually. I think a beastie has been in that bag with them. No signs of anything much happening otherwise although I could convince myself there are early signs of teeny top growth on one or two of the cuttings. 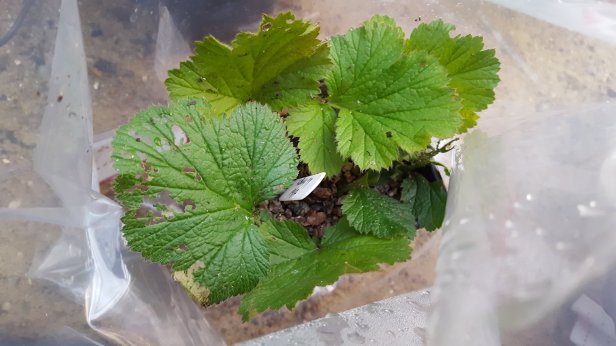 3) Verbena bonariensis, these have responded very quickly, lots of new growth and roots too. 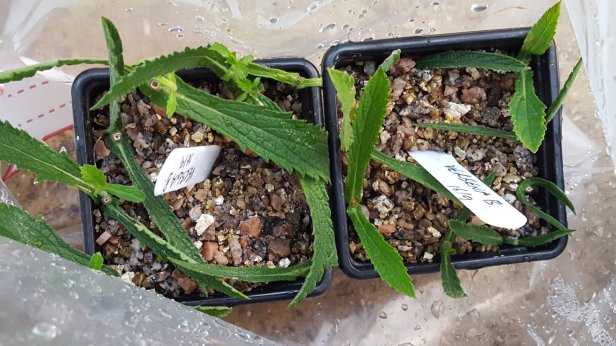 4) Monarda ‘balmy lilac’ – not so hot, most have rotted off but still a couple that might make it, there are some signs of new growth. There are two or three pots of these, all in a similar looking state. 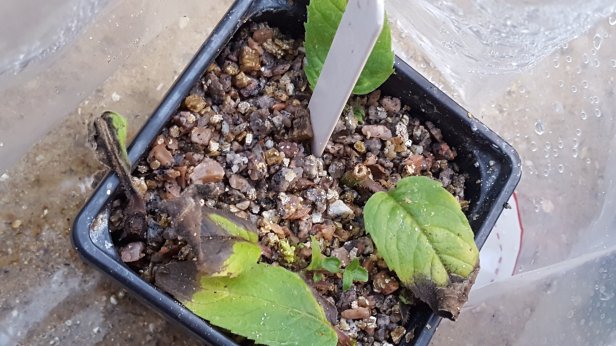 5) A mixed pot of penstemon and salvia, not sure which varieties. I liberated the stems from some damaged plants in a certain local DIY shed. They are looking happy enough. 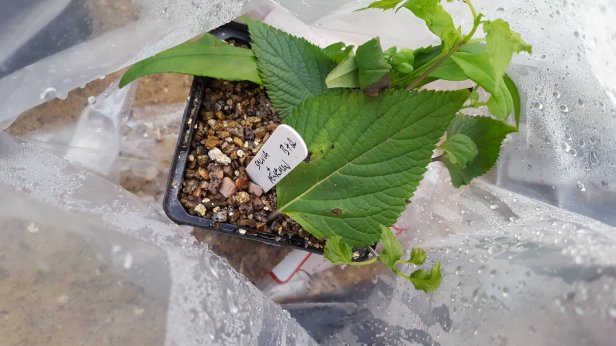 6) Salvia ‘hot lips’. Several cuttings have bitten the dust, rotted off, but the remaining few seem happy, lots of new top growth. I am hopeful. 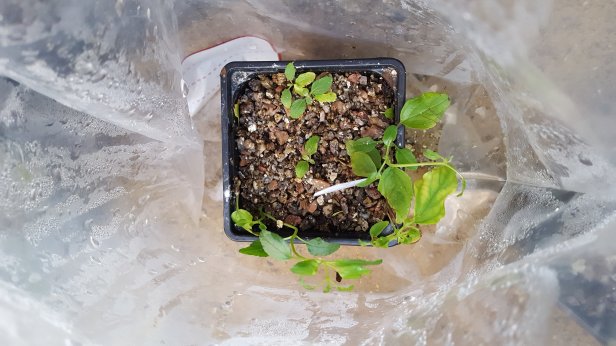 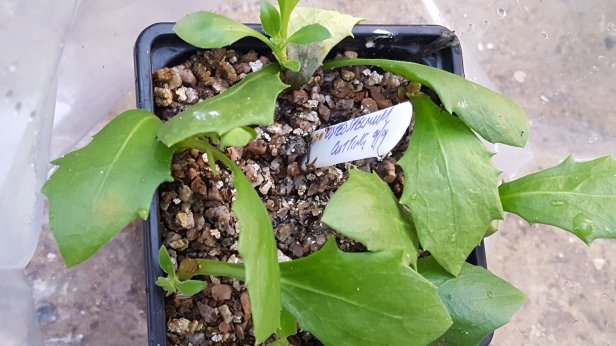 I have also taken cuttings of some variegated pelargoniums, some of which are not doing well, some are. These don’t like to get too humid so they are bag-less and just sitting in the heated bench, the cover off. I’m going to take more as I bring the parent plants in for the winter. 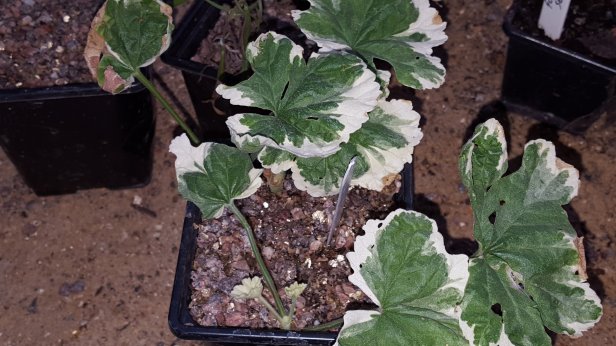 Finally, I also have several batches of ceanothus cuttings on the go, all still looking OK, you can read more about those separately.

That’s the state of the nation cuttings-wise. On the whole, encouraging. If I can just leave them alone till the spring…

I’ll be back soon with more propagation shenanigans.

I’ve been raising plants from seed for a good few years with some reasonable results. I’ve also dabbled a bit with cuttings with very patchy results. I became a little obsessed with the topic of propagation in 2016 and resolved to improve my success rate and to share what I discovered. This blog is my assorted ramblings, progress, disasters, setbacks, results and some tips along the way. The focus was initially propagation, which still features heavily but has expanded to cover the veg plot and the general state of the garden. The blog is mostly for my benefit, to keep track of what I've done, and hopefully is also of some interest to other planty obsessives. I post fairly frequently so click below to follow or sign up to receive updates by email. Comments welcome, I will respond to all.
Follow The Propagator on WordPress.com
Join 12,469 other followers