These are the continuing voyages of the USS Tomato. Boldly splitting infinitives, exploring new varieties and mainly trying to dodge the enemy – the Late Blight Empire.

My two main weapons against the dreaded blight are:

I am trying out seven varieties this year. Four are cherries, three are regular sized varieties.

Sungold. I sowed these very early in January. I’ve potted them on twice, they are in 1L pots now. They did not enjoy the recent temperature fluctuations, and they sulked a bit on transplanting to the bigger pots but thankfully, most of them seem happy enough now, not too leggy.

Roma & Gardeners Delight. Sowed a bit later in January, these were in 7cm pots having been pricked out initially into seed trays. I don’t know why but all of them succumbed to an unpleasant and fairly sudden death. I wonder if I put too much fertiliser in the potting mix. I have consigned the lot to the compost heap, 18 little ex-plants. Boo hoo. 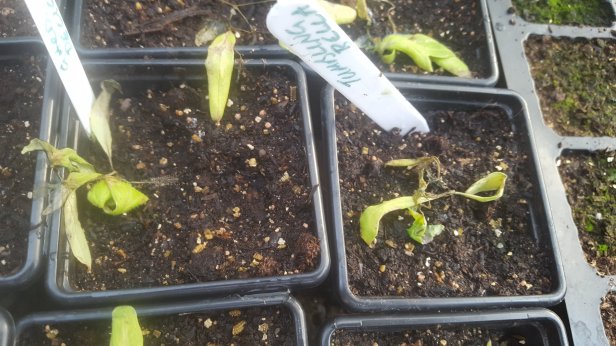 Tumbling Bella. Hmm well. These were in a tray that was right on the leading edge of the heated bench when the Beast From the East struck a couple of weeks ago. Although I had put some fleece down as additional protection, lows of -8°c were enough to penetrate my defences and this tray was a little frosted as a result. I lost the seedlings in the front half of the tray. The rearmost ones are hanging in there and beginning to recover some poise. I’ve potted them on to 7cm pots, no extra fertiliser this time, just in case. 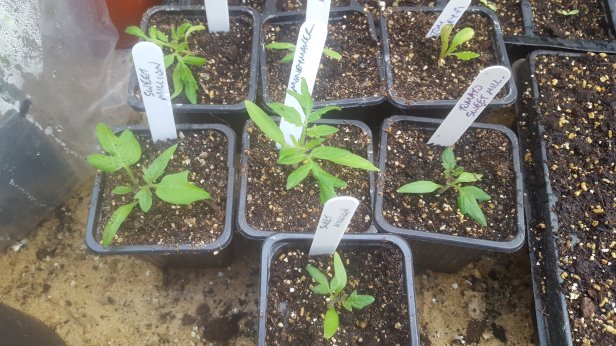 Since I seem to be struggling with many of my early sowings I have taken the precaution of sowing a second batch. These are indoors on a sunny window cill, on a heated propagator. Perhaps I should have started them all like this two months ago. Never mind, we’ll see.

Sowing tomatoes early was always a bit of a gamble but I thought I would mainly be dealing with low light levels. I had not anticipated such inclement Easterly weather. Mixed results so far then. How are your tomatoes doing?

I’ll be back in a month or so for another update from the Captain’s Log.