I recently pruned a few shrubs in my garden, providing quite a pile of pruned stems.

In the past I might have shredded these, or if feeling time-poor I might even have stuck them in the green bin. This year I have decided to make use of these stems to solve a gardening problem. I have a number of perennials that grow quite tall, such as helenium and delphinium. These and their lankier ilk need support or they may flop over and become unsightly. I have muddled along, making support using bamboo and string, or even some made from some steel rods. Of course, you can buy fantastic plant supports but they are expensive, and often plastic, public enemy number one these days. The stems are going to become plant supports. I have in mind a couple of different kinds. Type 1 is a circular grid on stilts, through which a tall perennial can grow. Type 2 is a dome shape, through which a low-growing plant such as a geranium or potentilla could grow.
Type 1

Select two longish, bendy stems. I started by bending both to form a circle, to check that they would serve that purpose. Next I wove one stem round the other, just twisting it round, so that I effectively have a plait made of two stems. This sometimes needed help with a bit of string to hold it together. I then formed the plait into a circle, and either wove the tail end into the head end, or more commonly, tied it off with some twine. This left me with a circle, roughly. 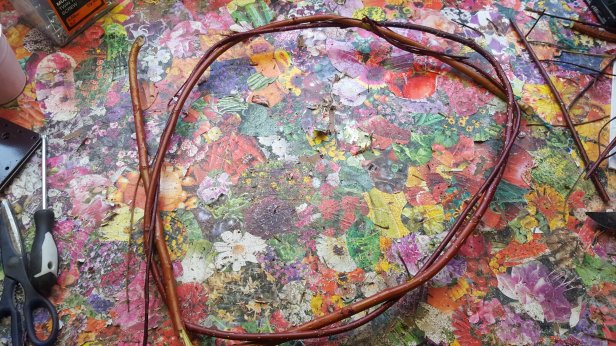 Next I cut some lengths of reasonably stout stem and threaded them across the diameter of the circle, tucking the ends through between the woven stems forming the circumference. 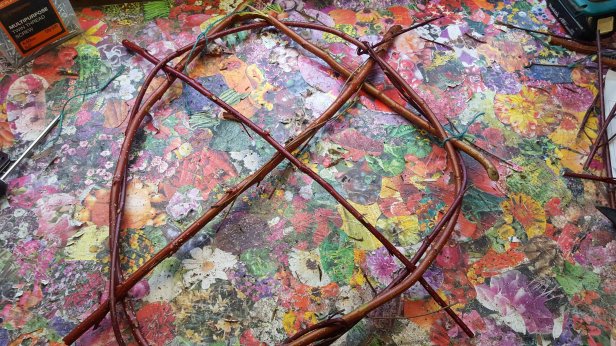 I repeated this on the diagonals.

As I added stems, I noticed that it became more difficult to thread them through, as there was less and less give in the circular stems. By this stage, it was also possible to “encourage” a more circular form as the cross-stems held it in place.

The last step was to add a couple more stems across the circle to make more of a grid.

I trimmed off the stem ends so just an inch or so protruded.

To make this useful, I will need to add some vertical legs. I think I will just use bamboo canes as I have used all the shrub prunings, and anyway they’ll be a bit stronger. I think I will be able to jam the legs between the stems in the outer circle, but failing that I’ll just tie them on with garden twine. The first one was a bit fiddly but I soon got the hang of it – I made quite a pile of these. 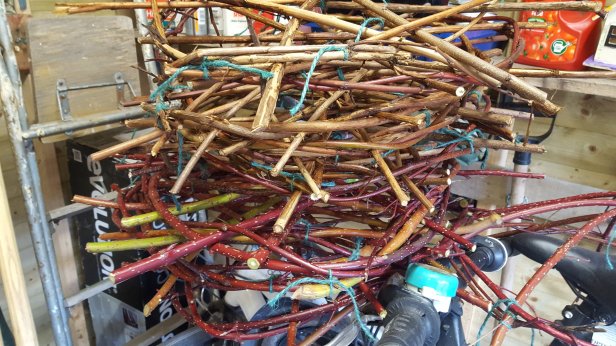 A dome shape for lower growing plants. I’ll say up front that this was less successful on first blush. I decided to make more of the first type, but on reflection this was fine and will be useful too.

If I was making another, I would follow the first step for the Type 1, making a circle out of two woven stems. Then I would thread the stems through as per the picture above, bending them into an approximation of a dome, four or five stems in total. My thought was to leave a good foot of stem sticking out so they can be jammed in the ground more or less vertically. Looking at the picture now, I might add another circle half way up the dome, just to form more of a grid shape.

The end result is I have just one dome and about ten of the circlular grids. I figure the circular ones can perform a similar purpose to the dome, I’ll just use shorter legs. I could do with another ten or fifteen of these, but need more stems. I’ll be offering to prune shrubs in neighbouring gardens! Or (genius!) this is the universe telling me I need more shrubs.

The observant among you will note that some stems are red cornus stems. To avoid rooting, I will tape up the stem ends.

I’ll be back soon with more garden stuff ‘n stuff.

12 thoughts on “How to make a plant support”