The world really is all topsy-turvy. Politics is all backwards, no-one knows what’s truth or fiction any more, the fourth estate is under siege but even more strange, this weekend is a bank holiday and the weather seems like it will actually be acceptably nice. I don’t like it. I want the reassuring patter of rain, an occasional clap of thunder and the misery of trying to bbq in the chill damp. Despite the unnaturally clement weather, I will continue stoically with this week’s Six on Saturday. Six things, in the garden, on a Saturday. Could be anything – a flower, a job to do, a plant, a tree, a tool, anything at all. Simple! Join in, do.

1 – Primula japonica x ‘Miller’s Crimson’. I grew these from seed last year, they grw on quite well but didn’t flower. The parent plant has quite deep red flowers. It is clearly quite promiscuous, however, as the children are anything but. Still, they’re pretty enough. I heard that they prefer a boggy position but I’m not sure I agree based on my experience. Certainly it doesn’t seem to be a strong preference. I put some straight in the border, some were left in their 1L pots, and the rest I planted in a make-shift bog garden, made by burying some plastic sheeting and refilling with soil. There’s no drainage so it stays quite moist. It is true that the boggy patch plants are flowering sooner, but the others are all putting on flower buds and I think they will catch up. 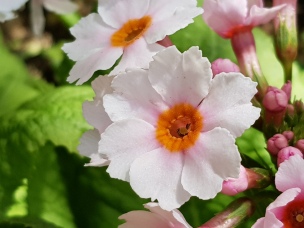 2 – Tulip, RIP. The inevitable end for all tulip flowers. One should of course dead-head to prevent the plant putting energy into seed production that would be better served feeding the bulb for next year. A job for this weekend. 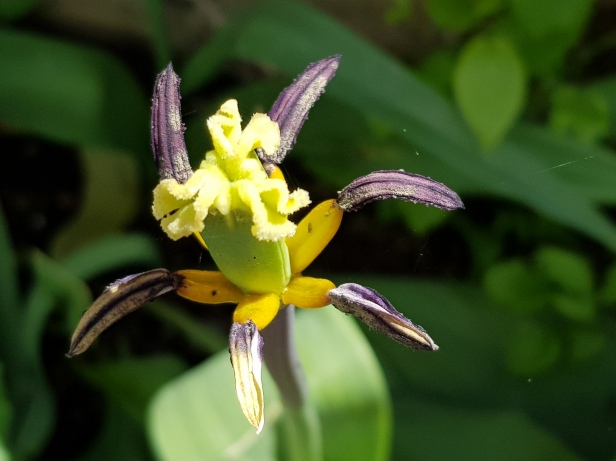 3 – Cytisus praecox, or broom, ‘hollandia’. I bought three of these in a typically unthinking sweep of the pity bench. They get to a decent size and two were quickly swamped by the third, so they were consigned to the compost. The victorious plant is now flowering away. I have another broom at the other end of the border, deep red flowers, which is only just getting going. 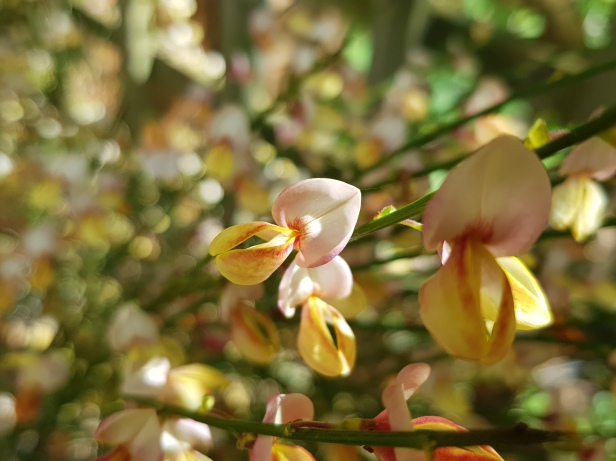 4 – Centaurea montana, perennial cornflower. I’d forgotten I planted this, had no idea what it was as it emerged from its winter sleep. I do have a couple of flowers but I thought this tightly packed bud made for a better picture.

5 – Fatsia japonica. This is such a weird plant. The emerging leaves look like zombie hands, escaping from a grave. Or is that just me? Too much “Walking Dead” recently perhaps.

6 – Photinia, red robin. Actually in next-door’s garden, so what’s known in the la-de-da trade as “borrowed landscape”. It’s enormous! Fortunately it doesn’t shade our garden. It’s mostly evergreen, but at this time of year puts on a flush of new leaves while jetissoning a load of old ones. Onto my sunny border…

Those are my Six, what are yours? If you’d like to join in, dead easy. Write your post, add a comment below and put a link to your post, and maybe add a link back to this blog in yours. For more details you can read the brief participant’s guide.

Have a fab weekend, I hope the weather isn’t too confusing, and that you can enjoy the unwelcome sunshine! Don’t forget to check back in as more links are added during the day.

I almost forgot! It is very nearly exactly a year ago that I published the first Six on Saturday. Looking back at my first Six post, I can see just how far behind the garden is this year. The new fatsia leaves had emerged, the wisteria was in full bloom, my lone rose was in bud, the lilac was in flower. Only the faintest signs of those things so far this year, so I’d say a good couple of weeks, maybe more, behind. Anyway, it took just a few hours for the Six on Saturday idea to intrigue someone else, Jim down in Cornwall, so I had company on the very first day. I don’t think Jim has missed one since! During the year more and more folks have joined in, some regulars, some sporadically, some just once or twice. It’s now routine to have nigh-on 40 participants on a given week, often one or two first-timers each week. I really enjoy reading the other Sixes, even if now that sometimes takes until mid-week! Here’s to a second year!