After a tough early spring, the weather has been more conducive over the last couple of weeks, and here in my corner of the UK we are almost past the last frost date. This year I am attempting to be more organised with my veg plot, normally a bit of an afterthought for me. I just have three 8’X4′ raised beds so am trying to get the most out of that ground.

The weather has not made this easy. For example, three sowings of carrots, dozens of seeds, have produced one carrot plant. I think it was just too cold for them, even under the cloche. I am not convinced they will germinate now so I will sow more in the same ground. The plot plan for the first half of the growing plan looks like this now. The mid-blue areas are planted out, everything else is still to come.

Let’s take a quick spin around the plot.

Sown, not yet planted out.

Borlotti beans – patchy germination, but those that have are pushing on through.

Runner beans – these are growing on strongly, like runner beans do, although not all have germinated. 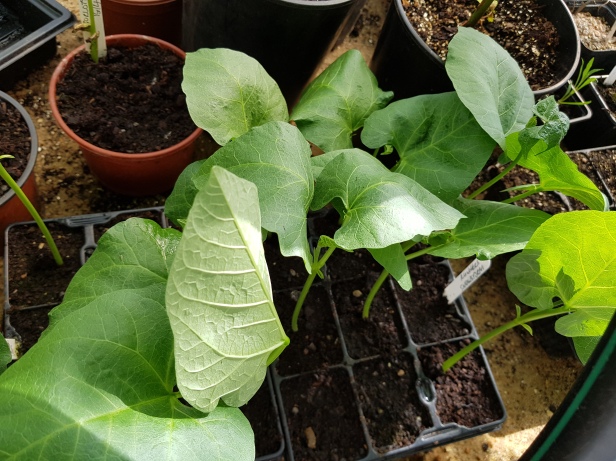 Snap peas ‘nairobi’ – the first batch did not germinate well, I just got two or three plants. I sowed again, this lot seem to be doing better. My next problem is where to put them as their allocated plot space has been taken by spare dwarf french beans. I will probably dot them in and around. 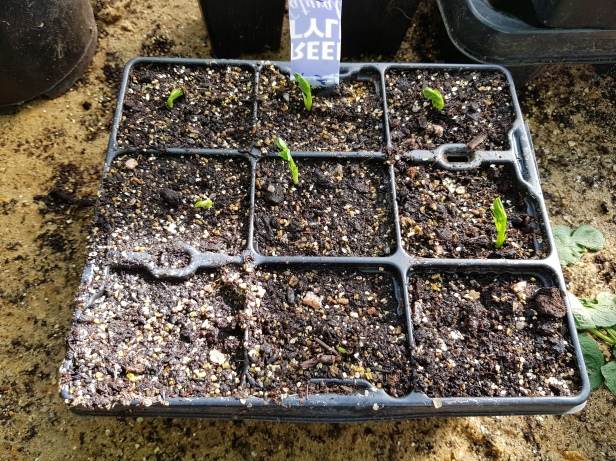 Courgette – I’ve just sown four courgette seeds with the intention of planting out just two. I planted four last year, only two plants really did anything and produced more than enough courgettes. Really, more than enough! The two strongest looking plants will go out.

Squash ‘honey boat’. I’ve sown eight with the intention of planting four or five, the strongest will go in the ground. 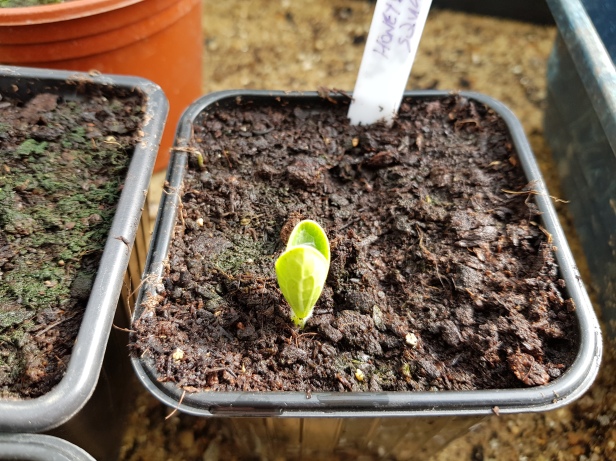 Squash ‘uchiki kuri’ – An early sowing from the second half of the season, not yet germinated. I am intending to grow these up the same canes as the sweet peas. The sweet peas better get a move on…

I will soon start to harden off all these squash and bean seedlings, ready to plant out in a week or two.

Leeks ‘musselburgh’ – last time round I opined about the leeks which looked pretty poor. In the end I kept them, repotted them in deeper pots and left them to it. I had intended to have these as baby leeks and sow a second batch for maincrop. Given their slow start I shall skip the baby leek stage and just plant these out when they are pencil thick.

Shallots ‘zebrune’. An impulse sowing, they are still in their module tray looking a little unhappy. I am hoping a bit of sunshine will buck them up. I don’t want to plant them out just yet.

Out on the plot

Peas ‘blauschokker’ – I did two batches of these, both are romping away up their canes now that the weather has improved. I’m looking forward to these flowering and podding up, I gather they are quite a sight, purple in both cases. The left hand canes are the first batch, much taller, second batch on the right.

Carrots, three varieties. As mentioned at the top, the carrots are almost entirely a bust so far. I sowed three batches over a number of weeks, outside under cloche protection. Just one has germinated and survived into plant-hood. The rest, nada. Not a dicky-bird. It’s unlikely to be the seed that’s the problem as I sowed a few different varieties. The most likely culprit is the weather – even with a cloche the soil probably just wasn’t warm enough. I also think that I didn’t water enough under the cloche. I’m going to sow again this weekend, which will probably result in a glut of carrots as my careful succession sowing plans have gone out the window now. Me and carrots have history – I am determined to grow a carrot worthy of the name, something with more than amusement value.

Parsnips ‘tender and true’ and ‘gladiator’. Nuffink, again I suspect the cold. I’m going to try pre-germinating some seeds indoors.

Onions, from seed. These are a disappointment. I had big plans for these onions. Of the 9 or 10 modules I planted, only three or four clumps look like they might do something worthwhile. Again I blame the poor weather.

Onions, from sets. Less disappointing than their seedy cousins, but I’m not totally convinced. When I planted them out I was worried that the sets were very soggy as the drainage in the modules was poor. Still, they live, the tops look healthy enough. We shall see.

Garlic, several varieties. I am pleased with the garlic. It’s the first time I’ve grown it, really it couldn’t be easier, just plonk them in the ground in mid-autumn and leave them to it. The tops seem to be growing on vigourously, thickening up nicely. I’m not totally sure when to harvest them, but not yet, I suspect. In a few weeks I’ll lift one to see what’s going on underground. The cloves I planted in sacks are also doing well. I have some that should store and last into the winter, and some that will need using sooner.

Radishes – planted with the carrots and parsnips, these are doing ok. I should be able to harvest soon.

Salad leaves – I have planted out all of my first and second batch of salad modules. I still have space for more so will sow another tray at the weekend. 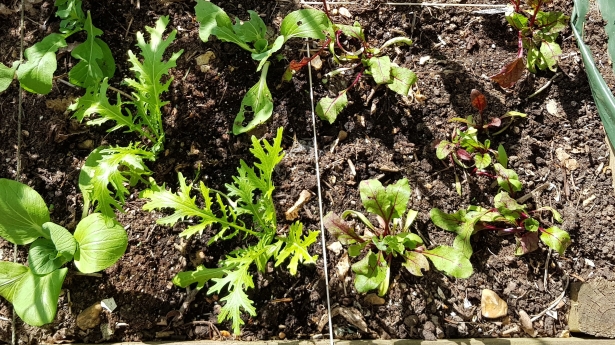 Beetroot ‘boltardy’. The first batch are struggling, probably a combination of cold and premature planting. I think I will compost them and replace with something more worthy. The second batch look much more likely to result in actual beetroots. I’ve planted them out in modules with several seedlings in each. I might need to thin out a little, I am aiming for four or five per clump.

Broad beans ‘crimson flowered’, ‘red epicure’. The first batch were planted back in March and are doing very well, flowering away. I don’t seem to be suffering overly from black fly. I particularly like the crimson-flowered variety, they are quite striking. I planted this batch at nine per square foot, they don’t seem to object. The proof will be in the harvest, of course. The second batch went in mid-April, they are growing on OK, nothing to write home about thus far.

Sweet peas. It’s been a long road. These were sown in October, spent the winter in the greenhouse or cold frame, then sulked at the bottom of their canes for several weeks. A bit of sunshine seems to have perked them up and they are finally climbing skywards. I need to tie them in a bit, they seem to be reluctant to get a grip on the string I helpfully provided. 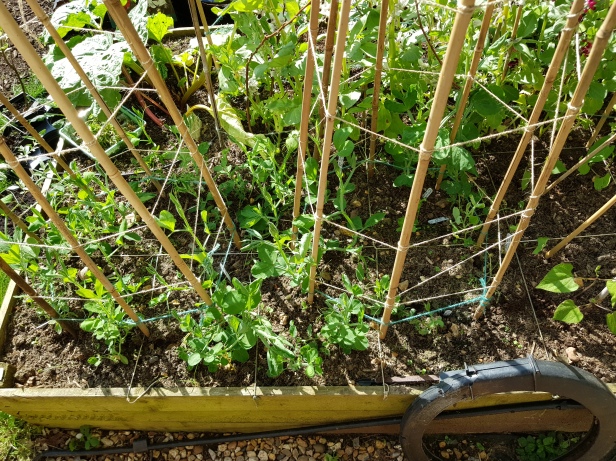 French beans ‘velour’. A dwarf variety, these usurpers took the spot allocated to the snap peas. Tough luck peas, gotta be in it to win it! In my quest to maximise crops from the available ground, I don’t want empty ground. Whilst I am not experiencing a massive slug problem so far this year (jinx!) something is having a tentative nibble at these beans.

Rhubarb – I clumsily picked a few stems, enough to make, well, nothing really. Stewed and with yoghurt, gone in a few gulps. I like rhubarb, if I had more space I would plant a whole bed and be dealing with a glut about now. As it is, I have to consider whether one crown is worth having.

Potatoes, earlies. Well. Last time around I had just planted up the pots. Since then I bought another bag of seed spuds that were on sale. I have 12 pots each of ‘Charlotte’ and ‘Lady Crystl’ and 10 of ‘Nicola’. The first two are all up and growing on strong, ‘Nicola’ are the later addition, no sign yet. 34 potato pots make for a bit of an obstacle course around the plot, but they seem to be doing very well. I’m looking forward to a first harvest of earlies in just a few weeks. 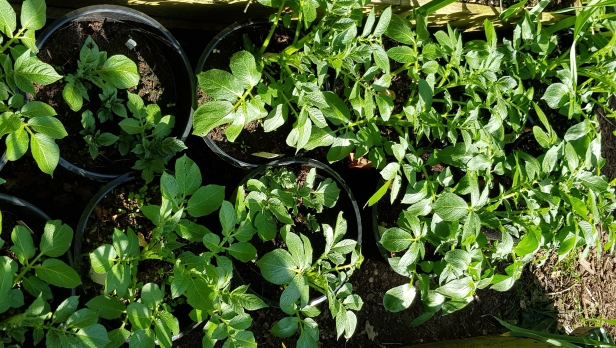 Potatoes, mains. I had a dozen ‘sarpo mira’, which were planted deep in large sacks, two per sack, the sacks then filled up. I know they’ll be OK as one is just poking through where I filled the sack less deeply. In a bit of an experiment, I have planted some dwarf beans in the tops of the sacks. I figure they’ll grow on a bit before the spuds break through, then they can climb a bit up the developing potato foliage. More crops from the same space is the theory – we’ll see!

Tomatoes and chillies – I’ll do a separate post on these soon, it has been hard going with these two but some progress has been made. I have a dozen or so decent sized tomato plants, and eight chilli plants, all still small. They have not enjoyed the cold weather AT ALL. More on this soon.

I think that’s everything. It’s becoming a job to keep up with the planting out and watering, weeding, all that business. But fun. How are you getting on with your veg this year?

I’ll be back in June with another plot update.