Since the first report, I have been busy filling up the hydropod unit. I still have a dozen or so empty discs so will be looking for more.

Not everything is happy in the hydropod. The berberis cuttings have been removed as they had begun to rot. To be fair, these cuttings were not fresh when I moved them into the unit, they had already been in a pot for a week or two. One or two other items are looking a little worse for wear. The majority look fab, with the stems and leaves all looking very perky, with plenty of lovely new top growth evident on many of the stems. With a couple of exceptions, what is not evident is roots! I had possibly unrealistic expectations of how fast rooting would occur in this new gadget. I was beginning to wonder if roots would ever appear, but just in the last couple of days the first signs are there.

The roots I do have are only recently emerged, on perovskia and rose cuttings. The roots are still quite small, but roots they are. The perovskia roots appeared after just 9 days in the hydropod, which seems pretty fast to me. I’m excited to see roots on one of the rose cuttings. I’ve not had any luck trying to propagate roses from softwood cuttings before, so this is a first. Perhaps I’ll take more rose cuttings now! 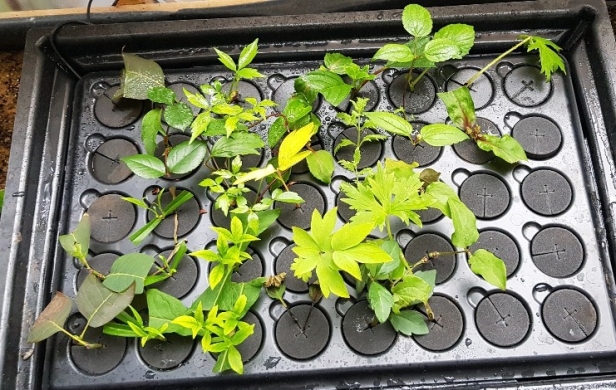 There are a few that look unhappy.

The cotinus in bottom left corner looks a bit iffy, although others I took look fine, and also the viburnum in the 4th cell on the bottom row. Generally though, perky.

Lots of nice new top growth then. What about those roots?

It’s still pretty early days, of course. In a pot, 6 to 8 weeks is quite normal, and we’re not 3 weeks in yet, and some of these cuttings are just a matter of days old.

I am already liking the ability to see the roots as they form, removing the temptation I have always eventually succumbed to, to give a cutting a yank to see if it has rooted. Or worse still, firmly believing it has, turning the pot out to find it has not. This way is idiot-proof.

That’s it for now. I’ll be back in a few weeks with another update, hopefully many more roots to report.

5 thoughts on “Hydropod first use – update 1”