I have gone a bit doolally over the compost in recent months. I am on my third attempted hot heap and am trying to get this one to completed compost in record time.

I built this heap on Friday 26th October, using the method I described in a recent post,or at least I thought I did. Herein lies the tale of this heap.

Day 1. The temperature immediately after construction was just shy of 20°c. The manure and the hops were already a little warm when I put them into the layers.

Day 5. The heap has reached 56°c. By way of comparison, this is approximately the temperature a typical domestic system produces hot water at the tap. You’ll be glad (or possibly disappointed) to know that the heap is now too hot to have a bath in!

It’s day 5 so I turn the heap for the first time, from one bay into the next. Prior to turning, the heap still looks very stratified, the layers very visible. I have to report that it stank to high heaven when disturbed. A clothes peg would have been handy! 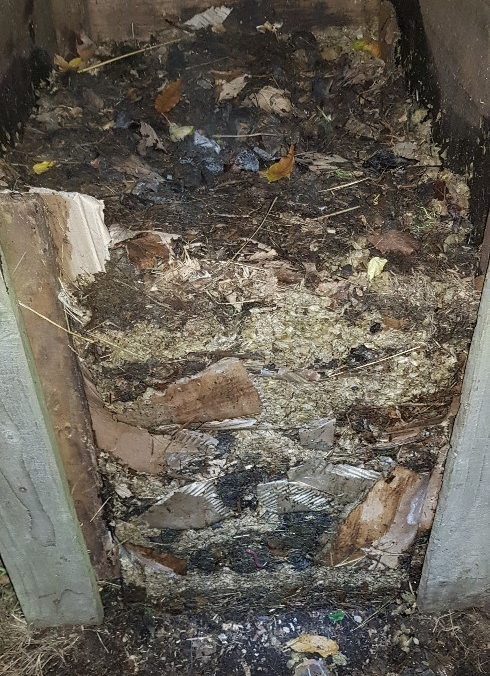 Day 6. Turning the heap has made a bit of difference, the heap has gained another couple of degrees. 58°c now.

Day 7. Wow! Smokin’ hot now, 62°c. This is bang in the middle of the effective temperature range, perfect for sustained and rapid decomposition.

Day 8. I turn the heap again, the second turn. The first turn has jumbled things up nicely, but the compost is still pretty identifiably made up of its constituent parts. It still pongs, but less so. 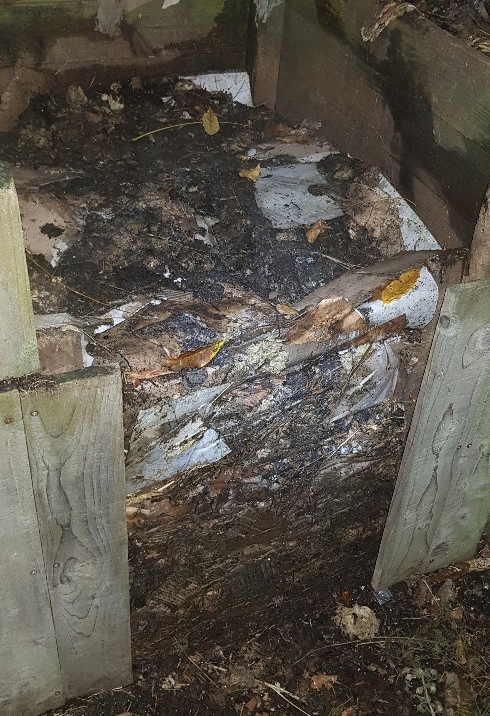 Day 10. Things are already looking a good deal more mixed. The cardboard is much less noticeable, mostly having broken down into much smaller pieces. The heap is nice and hot, in the high 50s. Time for the third turn. A little pungent but not offensively so. 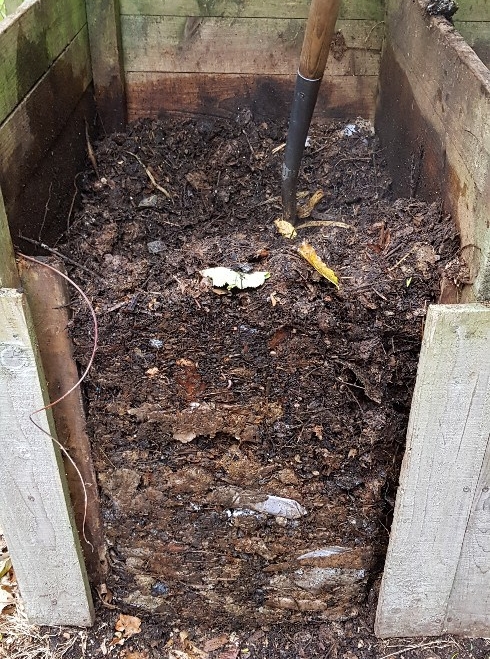 Day 15. A business trip to the US has prevented me from inspecting or turning the heap during the week, so this is the first opportunity. It’s still pretty hot at 56 deg, I wondered whether it would drop, not being turned for 5 days. There is still quite a lot of identifiable cardboard, I would normally expect that to have mostly disappeared by now. I think it is because some of the cardboard I put in was glossy on one side, that seems to be slower to break down. I shall avoid that in future. There is very little odour now, just a pleasant earthy smell. Last weekend I added the recently deceased carcass of a pigeon, the unfortunate victim of a moggy attack. That had almost entirely decomposed, bones and all, just a few feathers remaining. Those microbes work fast in a hot heap. 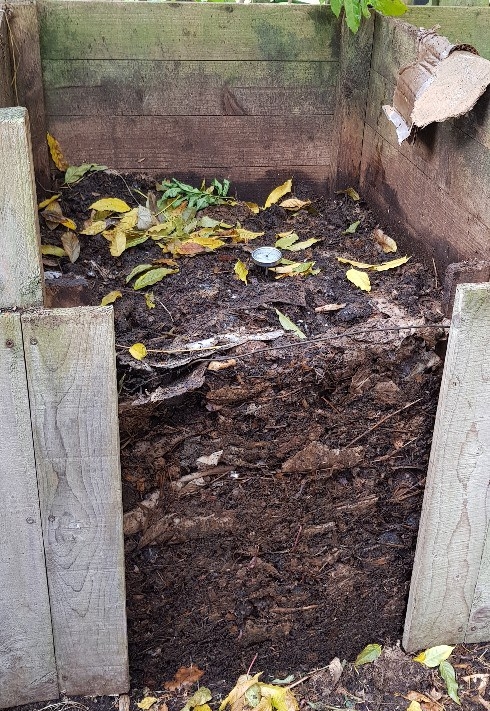 Day 17. Now that I’m back home I can get back to a regular turn schedule. Every two days is my aim from here on. The heap was notably cooler than two days ago, just over 44 degrees. I’m not sure if that is because I left the cardboard cover off, allowing the heavy rain on Friday evening to cool it down. Or perhaps the bulk of the decomposition has happened, or perhaps the microbes have run out of easily consumable fuel. If I had more material to hand I might add some more “green” in to heat things up. As it is, I shall turn it regularly for week or two more and see what happens. On turning, the heap was odourless and dark in colour. I still see quite a lot of that pesky coated cardboard, but generally there’s a noticeable difference in appearance even in the last two days.

Day 18. This is no longer an active heap. The temperature has dropped to 32°c, it now feels cool to the touch. I’ll have a closer look when I turn it tomorrow. I think my mix of ingredients must have been off. Too much “green”, not enough “brown”. I find this counterintuitive as the green materials are the ones that seem hot, but in fact the carbon in the brown is also required for the bacteria to build their bodies, to multiply. If there’s not enough of it they stop. Since it’s the exponential growth in bacteria population that I need for the heap to remain hot/active, this is a bad thing. The heap will continue to compost down but as a cold heap, slowly.

Day 19. 6th turn. Temperature and appearance similar to last couple of days. I need to take steps. I’ve read that adding blood fish & bone can provide more fuel. Next time I turn the heap I’ll add a few scoops to see if that makes a difference.

Day 21. Another turn. I’ve added half a scoop of blood, fish and bone every 10 or so forkfuls of compost. We’ll see if that makes a difference to temperatures. It was a bit difficult to tell in the dark but the compost seems reasonably well rotted. I think I would be happy to use as a mulch, in fact, but I’ll get a better look tomorrow in the daylight.

Day 22. A mere 26°c today. If the blood fish and bone is going to have any effect it clearly needs longer than 12 hours. I had the chance to take a photo in good light, the heap is quite dark in colour and pretty well mixed. Aside from a fair bit of that glossy cardboard which I’d need to remove, it does look ok to use as a mulch. Not bad in three weeks. My only worry on that front is whether it stayed hot enough for long enough to kill off any weed seeds in the manure. It was in the mid-50s or better for a good week, week and a half, so hopefully that is enough.

Day 23. No difference in temperature, that was a waste of blood fish and bone. I decided this compost is ready enough to use as a mulch. Despite not achieving the full hot heap effect for the life of the heap, I’m pretty pleased to have gone from raw ingredients to a usable (if not finished) compost in 23 days.

I am determined to build a good hot heap. On Saturday I built a new one from gathered ingredients. I have revised the mix of ingredients to be the all important 1:2 green:brown ratio. I was careful to measure the ingredients in buckets. I will monitor the temperature of that heap carefully too.

I’ll be back soon with more compost capers.