I’m an indifferent grower of veg, preferring the ornamental side of things, but I struggle on manfully. In fact, things have gone quite well since the update a month ago. Some good sunshine and even some rain has worked just as well for the veg as it has for the rest of the garden. I’ve sown the tender veg too, and even my nemesis is proving tractable this year.

This is the plot plan for the first half of the growing season. Blue squares are either planted out or sown direct, other colours are not yet in the ground.  The risk of frost is now low enough to plant out the tender veg, this weekend I think, just leaving the final successional sowings of salad and carrots. 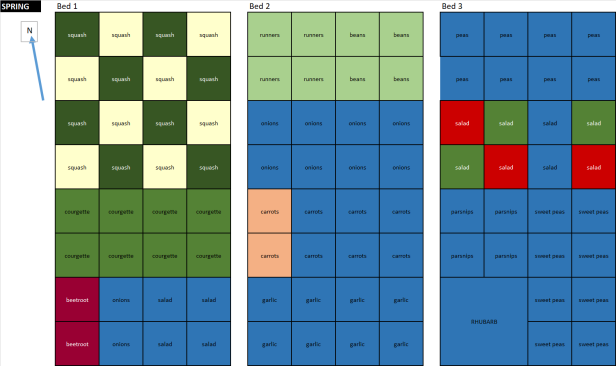 Onions – I’m pleased with these ‘sturon’ sets, a hurried replacement for seed failure. All 72 are growing on well.

The garlic is also doing well, these should be ready to harvest in just a couple of months, less perhaps.

Runner beans – I’m growing ‘moonlight’ this year. They are growing strongly and do well on my piece of ground. I sowed 5 or 6 to a pot. I’ll separate and plant them out this weekend.

Green beans ‘blue lake’. A climber, I have the canes ready for them. These are in root-trainers which seem to work well.  I’ve sown some more, I’m honestly not sure why…

Squash ‘crown prince’. I’ve not grown these before. I gather they are quite vigorous. I have reserved half a raised bed for them. I may only fit two plants in here, and even then I’ll have to spiral the stems around. I think I’ll let them grow on a but before putting them out.

Squash ‘uchiki kuri’. I wasn’t going to grow these again this year but succumbed to temptation. I’m not sure where I’m going to put them…

Courgette ‘ambassador’.  To limit the possibility of glut conditions I will only plant two out. I’ll still have too many courgettes.

Carrots. Actual, honest to god seedlings. As regular readers may recall, I am hopeless at carrots. I sowed these direct a few weeks ago, 16 stations per square.  Last year none of my direct sowings did anything – it was either too cold or too hot. I need to thin them out to just one seedling per station. I’ll just snip them off.  I have since sown another two squares of carrots, all ‘nantes 5’, and will sow another two squares in a couple of weeks.

Salad leaves, various. These are almost ready to harvest. In fact, looking at them again , I think I could take some of the outer leaves now. Always a winner, I’ve got two further batches on the go in the greenhouse.

Beetroot ‘bulls blood’ and ‘boltardy’.  These are almost ready to go out I think.  They are multi-sown, I’ll plant them in groups and can harvest roots as needed.

Peas – ‘kelvedon wonder’ and ‘oregon sugar pod’ The first batch is doing well, the smaller plants are the second batch, planted just before I took this photo. I am hoping for a good(for which read worthwhile) crop this year.

Potatoes – earlies ‘red duke of york’ and ‘charlotte’.  Planted one per pot, they are all up and growing well.  I had some fleece over them for a couple of nights to protect from frost but no harm done.  There is no sign of the mains (‘desiree’) yet but they were planted deeper, in full sacks.

Chillies – these are doing well in the heated and lighted propagator, some are almost too big. It will soon be time to move them to the greenhouse.  I almost killed the chillies, forgetting to water them for about two weeks. All bar one recovered once watered, a close call.

Tomatoes – I had to move the toms back onto their windowsill perch, they grew too big for the propagator. They can go into the greenhouse very soon, once I’ve cleared the space for them!

Sweet peas – well, these are very poor compared to last year.  I have tied them in to the canes, but I am sorely tempted to rip them out and plant something more useful.  Perhaps that’s why I sowed the extra beans and the uchiki kuri! I hesitate only because a handful are showing signs of putting on beefier growth.

I have made a start on the plot plan for the 2nd half of the year but am not done yet.

That’s the state of the veg nation in my little plot. How are you getting on?

I’ll be back in a month or so with another update.