Six on Saturday!  Six things, in the garden, on a Saturday.  Could be anything, a good flower, a pesky weed, a project, a favourite tool, anything at all.  Join in!

1. Gaura ‘Passionate Pink’. This plant is among several plants (a load, really) that are either recent propagations or as in this case, recent bargain purchases, all of which are in a queue waiting to be planted out.  When I bought this one I assumed it was reduced in price because it was finished for this year, so I was thinking about next year really.  However, it has had a little flush of flowers which has given me a handy view of what it might look like. I like it, definitely a keeper.  Now I just have to find a spot for it…

2. Japanese anemone ‘Honorine Jobert’.  I’m 95% sure the variety is correct, the labels are long gone.  I bought these plants about 10 years ago, they mind their own business during the year, but come into their own about now.  The slightly depressing news is that they are very much a harbinger of autumn. I have two clumps of this plant, one in very poor soil on the margins of a shady border, they seem quite happy there.  The other clump is in Border 2, the sunny border, but constrained for space.  As a result these plants grow very tall, giving a chest-height blast of bright white flowers.

3. Potentilla fruticosa.  This shrubby cinquefoil has been quietly occupying a corner of Border 1 for a few years. It has been flowering for weeks, and still doing pretty well, although there don’t seem to be many new flower heads.  It is a little crowded out by a carex and the neighbouring loosestrife but is holding its own. I tend to err towards bright colours (I’m a simple creature), this plant is one of few in the garden that is a more pastel shade. 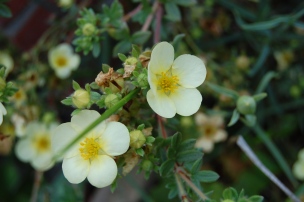 4. Solidago gigantea.  This is a North American prairie perennial.  I’ve no idea where it came from, I certainly didn’t sow it or plant it. Words like “thuggish” and “invasive” are used to describe it on the RHS website, so I may come to regret not digging it up sooner.  For now it is flowering brightly, attracting pollinators so it can stay. I think I will remove it once the flowers have gone over, hopefully before it starts setting seed.

5. Delphinium ‘Black Knight’.  This is another bargain purchase.  I’ve never grown delphiniums before, so I’m looking forward to finding a spot for it.  I think I might put it where the mallow is now, in Border 2.   Like the gaura, I did not think this had any flowering to do this year, but it is having a little hurrah. 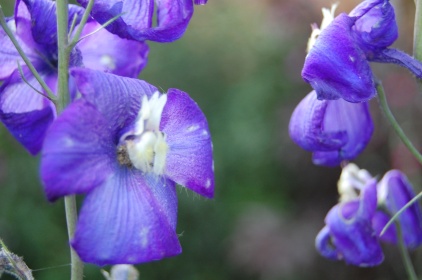 6. Penstemon ‘Patio Wine’.  Another bargain purchase for which I had low expectations this year.  It is also flowering well.  I am pleased with the colour, I think I’ll plant it in Border 3.  When I’ve cleared it out a little.

That’s my Six, what are yours?  Please do join in, more the merrier.  If you’d like to, please just leave a comment below with a link to your post and maybe put a link back to this blog in your post.

I’ll be back next week with another Six.