Continuing my monthly spin around the garden, considering the borders as a whole, rather than individual plants, here is November’s tour.

Most of the border tidying is complete now, still a few bits and pieces to do in the front garden. I do like a good tidy-up at this time of year. Yes, the borders look a little bare in places, but they also look neat-ish, and I can see next year’s growth coming through in many of the perennials – always a hopeful sign.

Since last time, I have also finished the bulb planting. This has felt like a herculean task at times, but I suppose I must concede this is mostly (but not entirely – I was egged on) my fault for buying so many. I would guess about half are in various patio pots, the rest are either planted direct in the borders (mostly alliums and some daffodils) or planted up in 3L pots first then buried in the border. The bulbs are obviously all hiding for now, I hope to see some daffs poking through by the time the next Patrol comes round over the holidays.

Border 1 – I’ve removed all the scruffy growth from the alchemilla mollis, the potentilla and the loosestrife. I haven’t got around to removing the fuchsia, but since they are still putting out flowers, I’ll leave them be for a while.  I also removed one of the three pheasant’s tail grasses, it’s gone to Border 5, more on that later. That cotinus is an embarrassment, sprawling ever more drunkenly about the place. The leaves haven’t even had the decency to turn a good colour.  Next year is its last chance – I will pollard it back again early spring, then give it another trim late spring once the stems have reached a decent length. That carex, gotta move it or bin it. 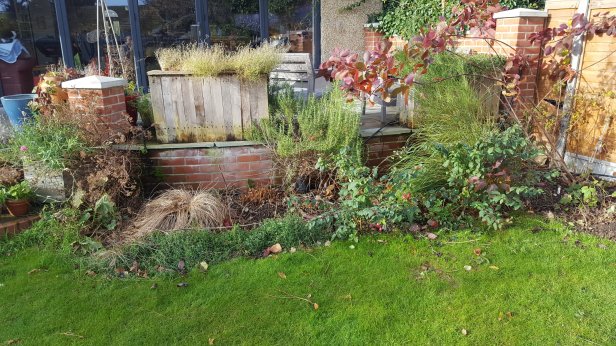 Border 2  – Continuing the ruthless clearance of unloved shrubs and plants, I have extracted the escalonia and the witch-hazel, neither of which was earning its keep. The opportunity cost of that space is too high – there are so many other plants to try! The dahlias have for the most part been lifted and stored for the winter. I have left some of the ‘bishops’s children’ bedding dahlias in place as an experiment. If they come through OK I will leave more in the ground next year. The rest of the border has had its seasonal trim, the annuals have come out, such as they were, and the perennials have been cut back. Lots of bulbs have gone in here. I have planted another climbing roses in amongst the clematis,  a ‘danse de feu’ from a hardwood cutting taken this time last year. There are now three of those roses along the fence line. They have grown on pretty well.  I haven’t cut the clems back yet, that can wait till February or early March. They are all young plants, none did a great deal this year – I am hoping for better things in 2018. I think the untidy clump of carnations towards the right end of the 2nd photo can come out. I think there is some invasive grass mixed in, and besides, I don’t much like the pinks.  I was hoping to have mulched this border by now, but I have only just got the manure for it.  A job for the weekend. 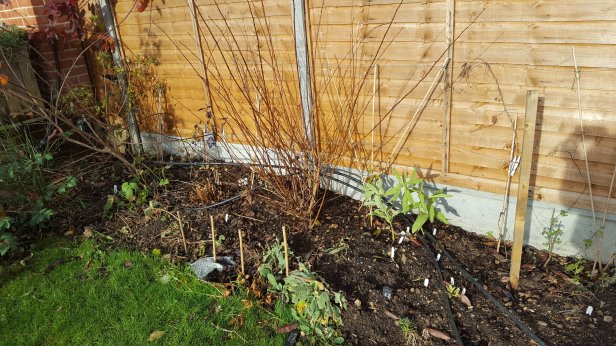 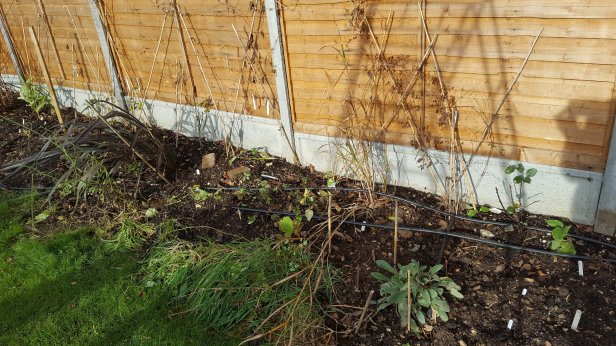 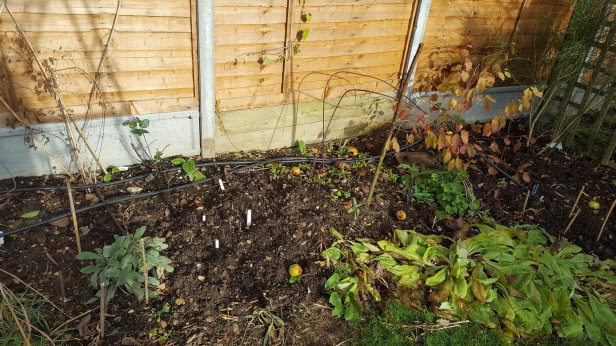 Border 3 – The canes are all markers for bulbs that I’ve planted direct. In theory this means I can avoid spearing a bulb with the fork.  In practice, I’ll probably knock the canes out with my clod-hoppers. I tried, at least.  Since last time I have mulched this border with some well rotted horse manure, and planted some more bulbs – buried in pots this time. Now that the buddlieia has gone, I can more clearly see the cornus in the corner, in front of the broom. It is the ‘mid-winter fire’ variety. It’s small right now, but has put on nearly all that growth this year. I’ll cut it back early spring and it should double in size next year, thereabouts. Finally, I have got around to planting out two climbing roses that I bought months ago, giving them a chop back as I did so. I am hoping they can be trained to cover the bare spots on the trellis which the unruly wisteria has been allowed to skip. They are “oh wow” and “golden ladder”. Talking of unruly wisteria, now everything is bare, I wonder if there is an opportunity to improve its coverage. If I prune back some of the lower side stems, close to the trunk, I should be able to train the resulting new growth lower down the trellis. 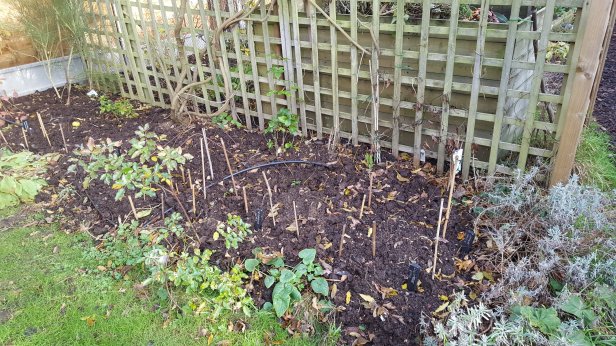 Border 4 – I’ve cut back the phlox, asters and linaria. I have also given the rosemary a good trim – by which I mean removed a limb – it was getting big and taking up too much real-estate. The fatsia has been good value the last few weeks, flowering its weird flowers. I think the lavender is overly scruffy. I might dig it up in favour of some of the zillion other things I’ll be growing from seed next year. No room for scruffy hereabouts. I think some bulbs have gone in here too. I think. That bare bit of trellis is still bothering me. I have options next year – I have some more climbing roses, I could grow annual climbers, I could move the hop from Border 6, or I have a honeysuckle to plant. Or all of the above. That’ll show it. 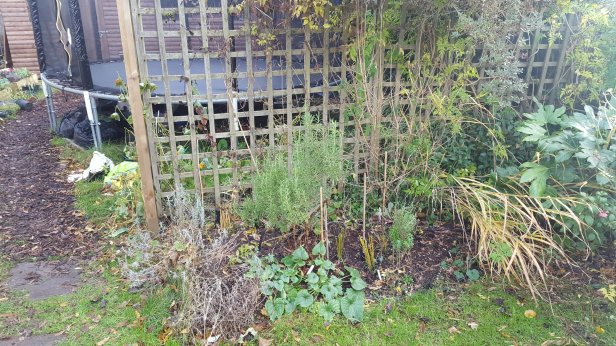 Border 5 – The abelia is still flowering away, in its 5th or 6th month, not bad value. It needs a good old prune for shape, it is getting sprawly. That’s a recurring theme in fact. The physocarpus and the pittosporum both need a good haircut. I am highly tempted to just go ahead and do it, but should really wait till March.  The dogwood is free both of leaves and jasmine and is thus able to show off a bit more. I removed an old pheasants tail grass and replaced with another younger model. I’ve cleared the hops from the trellis, and pruned and trained the mature ‘danse de feu’ rose. I’m hoping for more flowers next year. I’m always a bit surprised to find the climbing hydrangea behind the hops. I might move the hops to another location (Border 4, peut-être), see what the hydrangea can do when not smothered. It has slowly grown away and now covers a good deal of the trellis, so if it does anything it should be a good show. 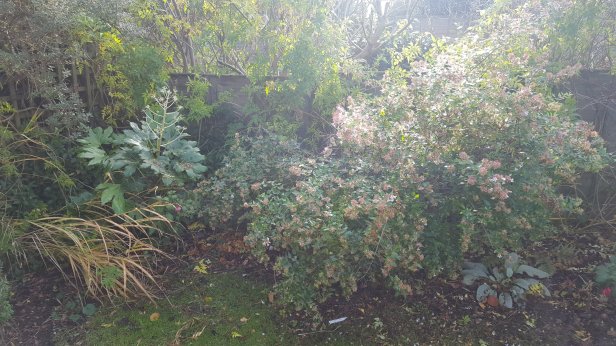 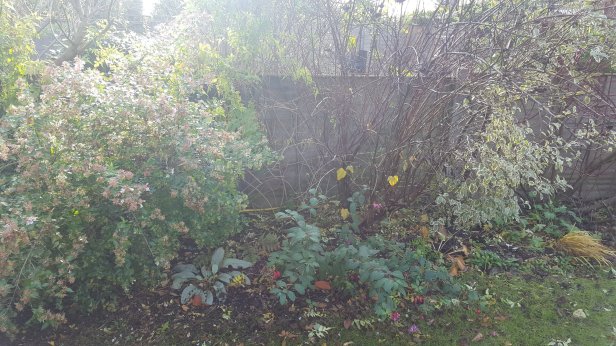 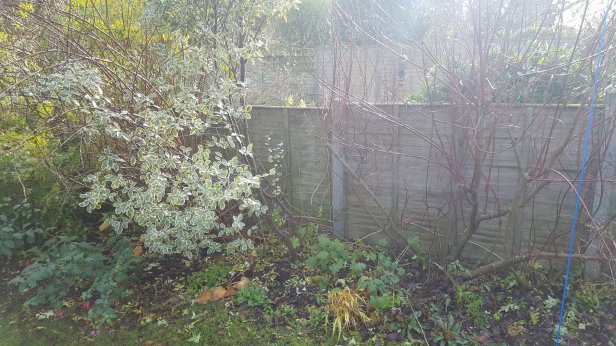 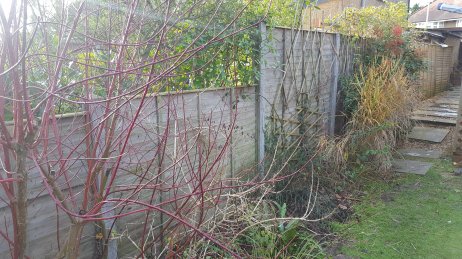 Border 6 – Still my mini-est border. The gaura and tiarella still think it’s summer, still flowering away, although a bit on their last legs. The helenium, on the right behind the tiarella, have not been good this year, they were smothered by the goldenrod I let take over. That’s long gone now, I was hoping the helenium would recover, but they might have given up entirely – I don’t see any new growth coming through.  Never mind, I have seeds coming from some other varieties which can take their place. I still have half a mind to expand this border, but have procrastinated. Next year perhaps. 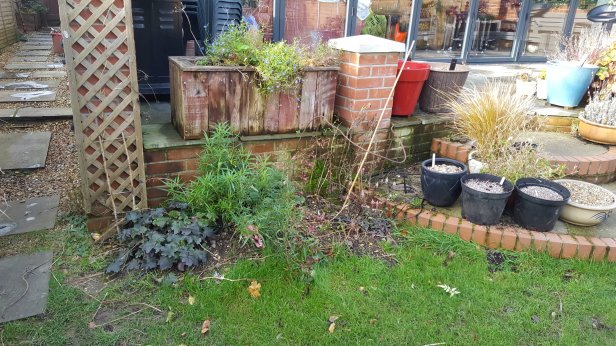 Border 7 – I haven’t cut back the monarda, although I should, but everything else has either been removed or cut back for the winter. Looks a bit of a mess, actually. I must sort that out this weekend.  Bulbs a-plenty in this border, definitely alliums & daffs and some tulips too I think. 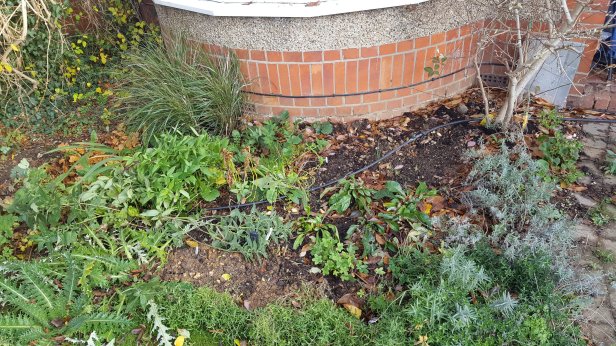 Border 8 – Cleared up a bit, the penstemon and lychnis coronaria look ready to rock and roll next year. The osteospermum is almost done flowering and I really should tidy the rest up.  Lots of bulbs have gone in here too, spring should be good. 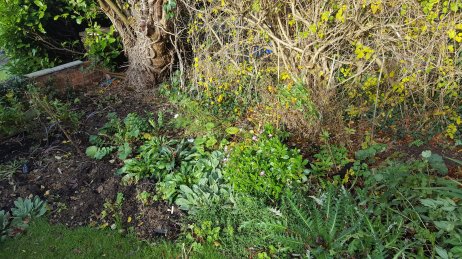 Border 9 – Everything is looking happy enough, if a little untidy. The perennial foxgloves look like they have established themselves, I’m looking forward to those flowering next year. I need to cut back the helenium, it’s done for the year. I want to mulch all of the front borders at some point over the next month or two. The soil was poor and although I’ve added some compost it will benefit from another good dose of manure. Another couple of trips to the paddock required. 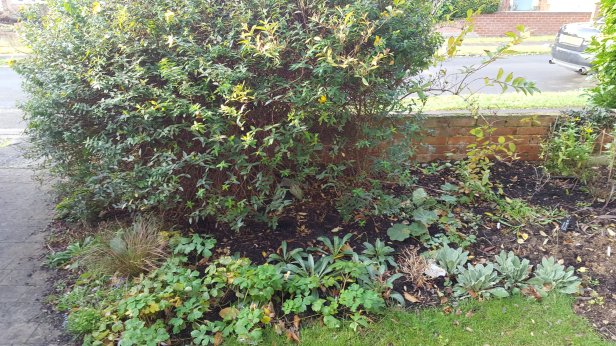 Border 10 – My stolen border, actually part of the grass verge on the other side of the garden wall. I’ve put some bulbs in here, but I must have a think about what to plant for the spring. I have some pansies actually, they might do for now. Might as well, they are still in the polystyrene trays. 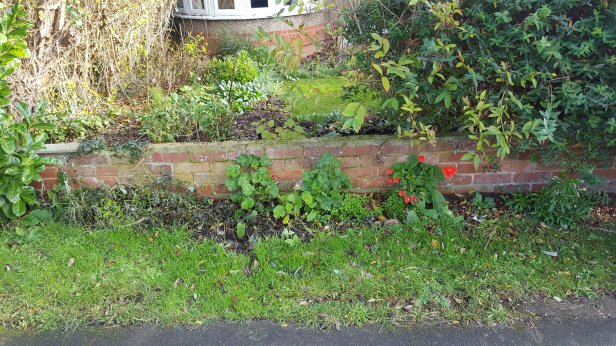 The front garden is in need of a good tidy in general, actually – thought I’d done it all but clearly some secateur time required.

At some point I need to combine the available border space and my various seed acquisitions and other spare plants into border plans, probably a job for the spring.  I am eyeing up the rear lawn for some grassy sacrifice. I think I can squeeze a new border in…

I’ll be back in a month or so for the next Border Patrol.