I have been busy adding planters to an otherwise boring passageway between our house and our neighbour’s house. It is in shade on one side, North facing, the other side gets some sun, properly described as partial shade I guess – it is south facing but shaded at times by next door’s house and the fence. I like the concept of a living wall and have occasionally thought about buying some of those hanging pockets. I recently saw a brilliant living wall arrangement on Jack Wallington’s blog, effectively a wooden shelving unit placed against his fence, in a similarly narrow, shady spot. He has planted his with ferns, all tolerant of dry-ish shade. His blog post majors on the plants and gives a comprehensive list of the ferns he has used.

After admiring this for a while I thought I would have a crack at building my own, using Jack’s plant list as a starting point. I’ve built mine and planted it up. Here is how I did it….

I used scrap wood from discarded pallets, but obviously the wood could be scavenged in other ways or even bought at a push. All joins are made by pre-drilling then screwing together. The pre-drilling prevents the wood splitting when the screws are tightened.

The size of the frame I built was governed by the lengths of wood I happened to have. I built each side using two planks, joined together by pieces of battening cut to size.

I found that this was a little unstable, the rectangular frame would easily become a parallelogram if given a light shove. To fix this I added some extra bracing to the inside of the rear of the frame. I cut two lengths of battening with 45° cuts on the end, then screwed them to the top and sides as shown below. This stops the ‘shearing’ I described before and made the box frame much more solid.

In Jack’s blog he described using 2L square pots for the ferns which then rested on sloping shelves. To make the shelves slope correctly, I needed to make the shelf supports at an angle. I cut some more battening to the right length, with 45° cuts on each end. I sort of guessed how far apart the shelves would need to be to accommodate a 2L pot on its side, measuring and marking accordingly on the sides of the frame. I screwed the battening to sides, checking they were level.

In the end I found some window boxes which were a good fit width wise but needed a bit more space, forcing me to move the battening about. Annoying but not difficult. Being bigger and holding more compost, the window boxes should retain water better than individual 2L pots.

The shelves were made by simply screwing two pallet planks to the sloping battening. 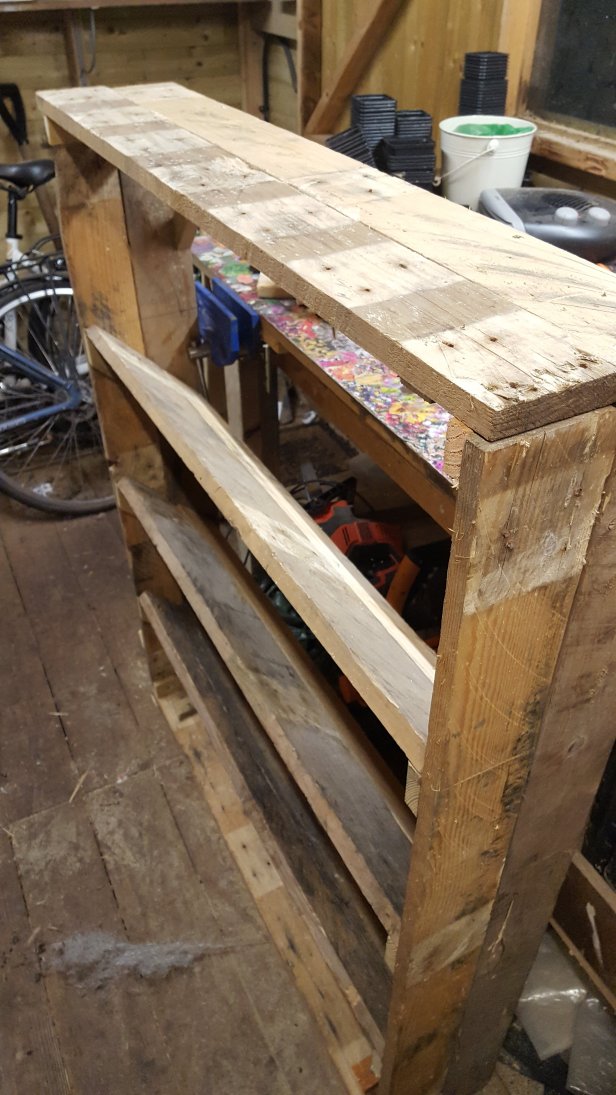 Although the pallet wood is treated, I decided to paint it with some wood preserver I happened to have. Two coats were needed, despite the alleged “one-coat” properties of the paint.

I could have just stood the frame against the wall but thought it would be more stable, and look better, if I attached it to the wall. I had some shelf brackets knocking about in the shed, those were attached to the wall then the frame suspended on those (imagine the top planks are the shelf). I then used two reasonably heavy duty 90° L-shaped joining plates that I bought from B&Q, £2.80 each. These were attached to the wall first, then to the frame, one on each side.

So that’s the construction finished, now to the fun part – the planting!

I ordered my ferns from shadyplants.net. Not being a fernatic, I used Jack’s planting list as a guide, then chose the ferns I liked the look of. I ordered the following ferns, one of each:

Ferns mostly grow in woody areas in the wild, so I used what I hope is a suitable mix for the planting boxes:

I wasn’t too careful about proportions, I just chucked in a bit of each and mixed it up.

For the planting I had 4 or 5 plants per box. I can’t say there was too much thought put into the placing, but I was aiming for the larger ferns to be in the lowest planter box. I will let them grow on a bit, I can always move them around if needed.

I enjoyed making this, the plants were by far the most costly element, the construction probably cost me less than £20 including the window boxes. I’m really looking forward to seeing it develop. I’ll need to keep an eye on the watering in the first year, but once they are a bit more established they should need less looking after.

I’ll be back soon with more garden nonsense.

Croy based ultrarunner and lover of Sherlock Holmes