It was beautiful last weekend, cold, crisp, clear blue, bright, just what you want from a winter’s day. I got some rose pruning done, cutting back some clematis while I was at it. I also sowed some seeds, any semblage of self-control disappearing when my HPS seed order flopped seductively onto the doormat. This weekend looks less than perfect, in comparison. Mild, foggy, damp, gloomy, grey being the words that spring to mind. No doubt I’ll drag myself into the garden anyway. But first, time for Six on Saturday. Six things, in the garden, on a Saturday. Could be anything – a flower, new growth, a job to do, wildlife, chaos, order, anything at all. Join in!

Here are my Six for this week…

1 – Cyclamen leaves. The flowers are long gone, and anyway, while they are pretty enough they are not all that. The leaves are rather handsome though, I think. This little clump has spread quite a lot since I planted the initial plant some years ago.

2 – Lupin, fresh growth. I think this is one I grew from seed last year, probably from Fred in France. Nice to see it making a return visit, poking its confident little face up through the mulch. No sign of Mr Slug. So far.

3 – Hellebore ‘Pink Lady’. I bought her ladyship and a few of her friends at Wisley last year, probably in the same giddy plant shop frenzy as last week’s clematis. I usually steer clear of the hellebores as they usually seem very expensive for what they are. These were half price so I bought some. Of course I did! She is a rather louche, droopy lady. Morose, even. Very pretty underneath the petticoat, as it very much were.

4 – Seed pots, lots of ’em. Last weekend I received my HPS seed order, 30 little packets plus one of mixed, mystery seeds. I sowed all the hardy perennials among the 30. Some are in the heated bench, some in the cold frame, and this half dozen are on an unheated bench in the greenhouse. I hope the hakonechloa macra germinates, I’d like to have a couple more of those.

5 – Allium christophii, emerging. I think I have 50-odd of these stashed in the greenhouse, which in hindsight seems excessive. I like them though, very large silvery purple heads, a garden firework, turning into impressively structural skeletal seed heads. I shall plant them out once the perennials in the garden start to show themselves a bit more, I’ll be able to see the gaps. Or, more likely, when I need the space in the greenhouse.

6 – Cosmos seeds, ‘Apricot Lemonade’. I saw these in the Special Plants catalogue and went a little week at the knees. Such an unusual colouring. I noticed after I received the packet in the post that they are on the short side for a cosmos. I will let them off if they turn out anything like the picture (credit: RHS website) 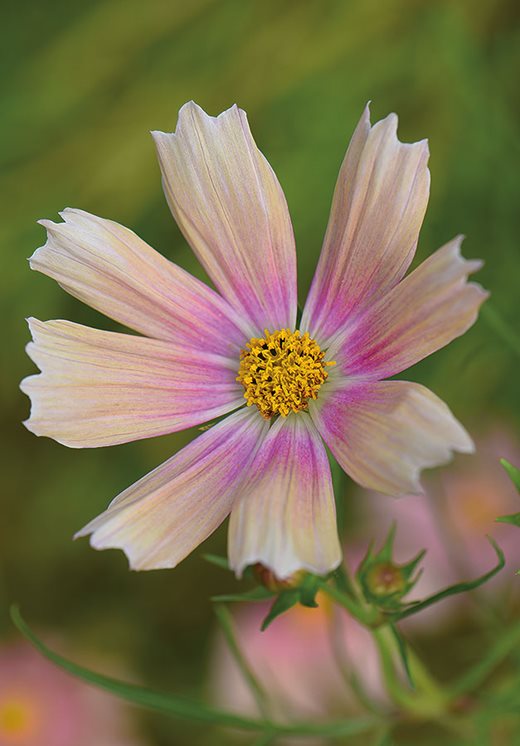 Those are my Six, what are yours? If you’d like to have a crack at it, just publish your post then pop a link to it in the comments below. If you also mention my blog in yours that would be splendid. For more details and for other ways to participate, you can read the brief guide here.

I hope you get out into the garden this weekend, don’t forget to check back in as more links get added during the day.

I’ll be back next weekend for another #SixOnSaturday.