Yesterday, there was a hot yellow thing in the sky. I remember it from last year, I think. I like it! When can it come back? Today I shall mostly be tapping my foot impatiently, waiting for a large order of ferns to arrive. They are to go in a “living wall” arrangement I have cobbled together. No doubt it will feature here at some future juncture. While I wait, it’s time for Six on Saturday. Six things, in the garden, on a Saturday. Could be anything – a flower (we have flowers!), a new plant, a plan, a success, a failure, a job to do, a tool, anything at all. Join in!

Here are my Six.

1 – Tulips! Remember those stripy leaves from a couple of weeks ago? The associated flowers have budded up and are now more or less open, basking in the unfamiliar sunshine. The consensus last time is they are a kaufmanniana of some kind. 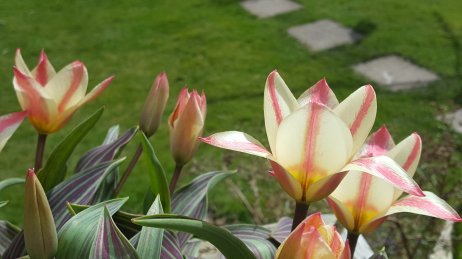 2 – Euphorbia cornigera. I think I bought this at a plant fair last May, having tried and failed to grow from seed. I cut it back early winter and had begun to think it had come a cropper in the cold snaps we’ve had. I need not have worried, it is breaking through the mulch and looks in good heart. There seem to be many more stems than I cut back, this is a good thing. 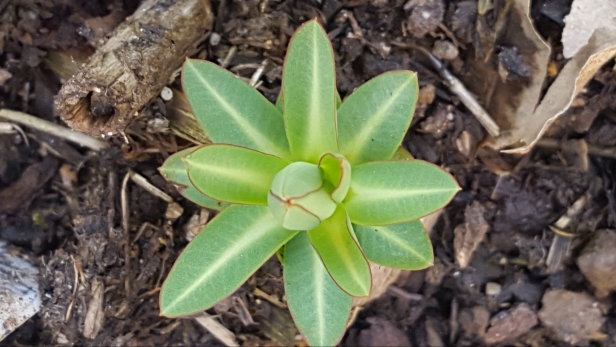 3 – Hakonechloa macra. I had almost given up on this hak mac, thinking it may have been too small a division to have survived. Today, however, on closer inspection I see that there is new growth coming through. Yay! 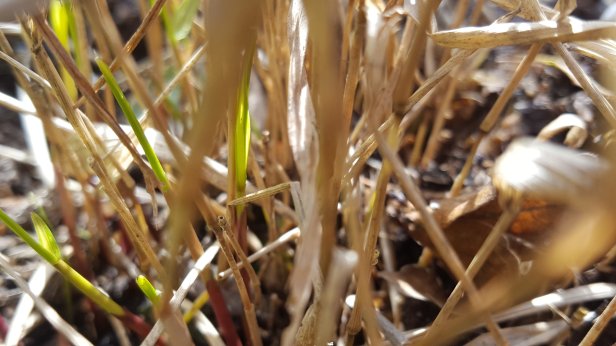 4 – Dunno notacluevia. I cannot for the life of me remember what I planted in this end of the planter. It must be a bulb, but of what ilk? Not a scooby-doo. It will be a nice surprise. Whatever it is, there’s quite a lot of it… 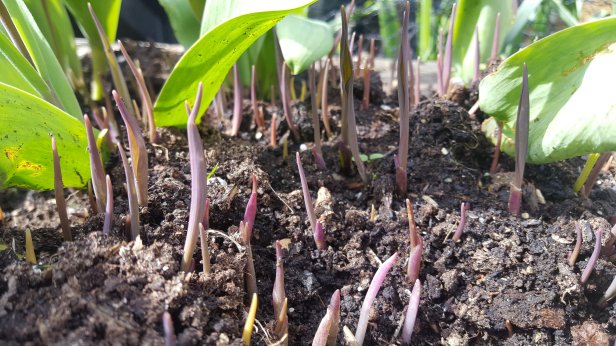 5 – Hart’s tongue fern. Last year’s fronds are looking a little past it, but I’ll leave them on for a few more weeks till the risk of frost has reduced to negligible levels. Parting the old fronds, it is possible to see the new growth coming through. In a few weeks these will be several inches tall, and almost as pretty and impressive as the final result. 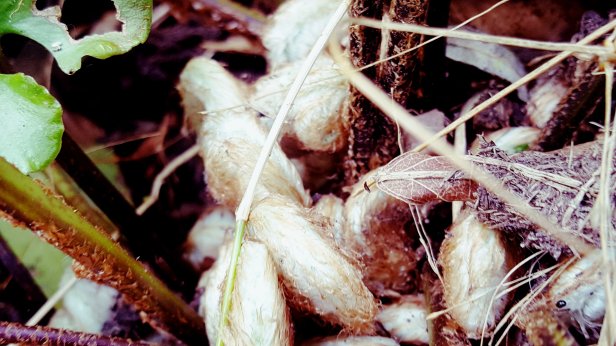 6 – Forsythia. We have a big unruly hedge of this between our front garden and our neighbour. It’s his boundary so I guess the hedge is his too. It is way too tall and doesn’t get a proper pruning except for what I cut away from my side in exasperation at its tendency to loll about and stab me when I’m messing about in the front borders. For about 3 weeks of the year it is bearable as it throws out a shot of welcome brightness, albeit a rather lary yellow. I don’t like it for the other 49 weeks of the year. It’s also common as muck round these parts, every other garden has one. If I had my druthers, I’d chop it down and dig it up. 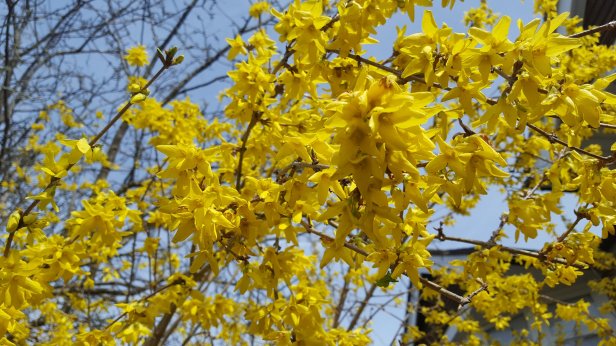 Those are my Six for this week, what are yours? We have had a dozen or so first time Six posts the last few weeks, so if you are tempted, why not join in too? Dead easy, just post your Six, then pop back over here to add a comment with your link in it. If you also add a link to this blog in your post, that would be fab. For more details you can read the brief participants guide.

Have a super weekend, hopefully incorporating some more of that hot yellow thing in the sky.

I’ll be back next week for another Six on Satirday.