Happy Birthday to Us! Well, nearly.  Almost three years ago I had a brainwave. I had seen a couple of memes kicking around the gardening blogosphere, but none that I particularly wanted to participate in – I decided to try to create my own.   You can read the very first one here. Not much has changed, very much the same basic idea. The main development has been the quantity of participants. I think there were 1 or 2 that first week (Jim is still a regular, a stalwart even), now there are dozens with blogs and dozens more that share their Six via Twitter. We are quite the plantaholics support group.

Anyhoo, time for this week’s Six on Saturday. Six things, in the garden, on a Saturday. Could be anything – a flower, a pest, a beastie, a disaster, a new purchase, anything at all.  Join in!

1 – Persicaria ‘Purple Fantasy’.  I took cuttings of this last year and planted another clump out the front. This is the original and it is doing very well, without becoming thuggish, or at least not yet. The flowers are very anonymous, the foliage is where it’s at. I will take a few more cuttings, I think, rude not to. 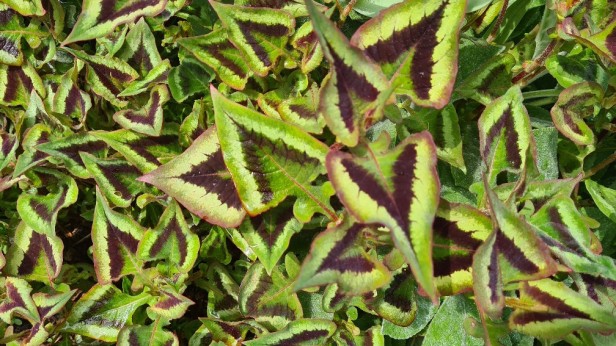 2 – The Living Wall.  A rather grand name for it, more like Living Shelves really.  made from scrap wood a couple of years ago, it had become a little patchy, a few of the original ferns were not happy (um, dead). I’ve refreshed the compost with plenty of leaf mould and filled the gaps with some new ferns from Treseder Plants down in Cornwall (thanks Jim for the steer).  Hopefully they will be happier, and certainly the Shelves are already looking more lush.  Looking at it with a critical eye, I can see improvements to the basic design that would mean a 4th or even 5th shelf could be accommodated.  Perhaps I’ll dismantle it and construct Shelves 2.0 at some point. 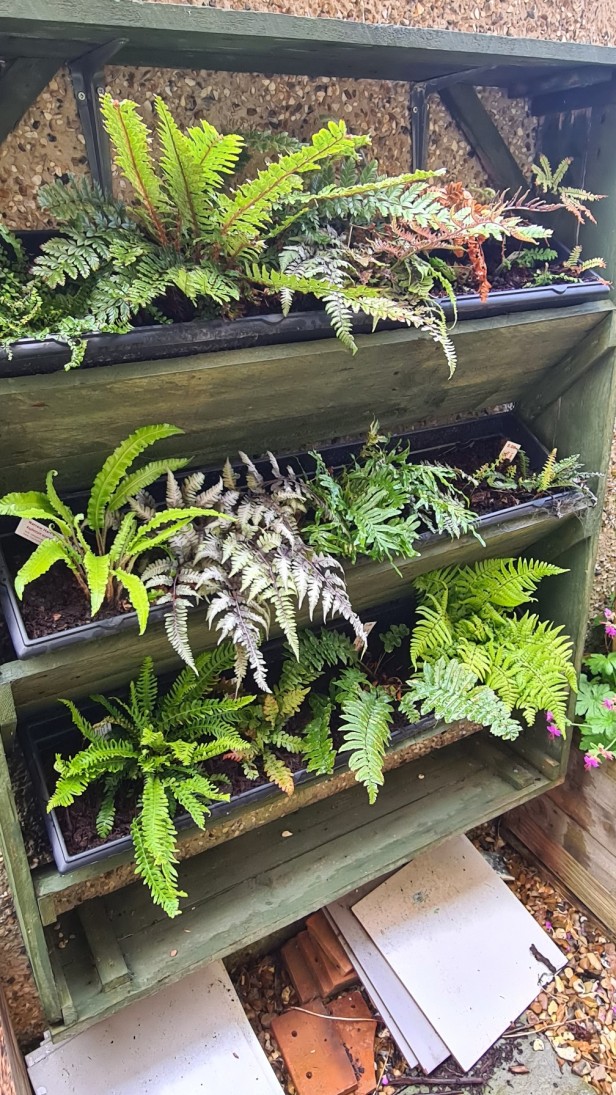 3 – Lonicera ‘Gold Flame’. I think I’m right in saying I bought this for £1.79 from Morrisons a couple of years ago, one of several climbers I bought at the time. It is now almost at the top of the 6′ fence against which it lives and is busy putting out lots of vigorous growth. It seems quite happy and is just starting to flower.

4 – Iris versicolor, purple iris.  Grown from seed a few years ago, they sort of flowered last year, but not much. This year they seem to have got the hang of it, seems like there will be several flowers.

5 – Clematis Montana. Not mine, actually, planted next door, it hangs over the fence. I think I get the better end of this deal, I think the majority of the flowers are on my side.

6 – New shrubs – I paid through the nose for these so I’m not massively happy with the quality of them, at least not judging by initial inspection.  I will give them a good water and see, but they may be going back.  Annoying.  On second inspection, two of the three look ok, it’s the cornus kousa that looks underwhelming, and was also the most expensive. It’s on the right under all that netting.

Those are my Six for this week, what are yours?  If you’d like to have a crack, just publish your post and pop a link to it in the comments below. If you also mention my blog in yours that would be spiffing.  For more deets you can read the brief guide.

I have along list of things to get done so I shall be anti-social distancing in the garden, I trust you’ll get out and about too.  Don’t forget to check back later in the day as more links get added.

Stay safe, I’ll be back next week with another #SixOnSaturday.